Real Tennis has had many Savilian devotees throughout the years. Currently, there are about a dozen members who play regularly at clubs across London, England, France and the United States.

Since 1986, Savilians compete annually at Lord’s for the Richardson Cup, the Club’s intramural real tennis handicap challenge. The cup is a splendid silver chalice presented in 1985 by Michael Estorick to honour the legendary Savilian, actor and player, Sir Ralph Richardson (elected 1933, knighted 1947, died 1983).

Richardson is well remembered at the Savile and at Lord’s for his sociability and eccentricity if not for his skill at Real Tennis which, late in Richardson’s life, was described by Henry Johns as being ‘as good as its ever been, bloody awful.’

No truer words could be said, in the main, about the caliber of Savile Tennis. The rules for the Richardson Cup, broken here for the first time, are simply that no rules should be written down. The happy result is that the Richardson Cup is conducted with Club conviviality in the dedans and the occasional spat on the court. 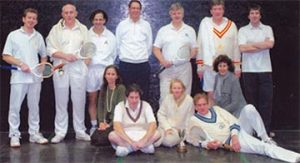 The most recent winner of the Richardson Cup Winner (standing, second from left) imagined the evening sun glinting through the long dining room windows into the trophy case on the engraved ‘2003 S.C.W. PARDY’ as Savilians yet unborn query the sheer improbability of it.

Savile Tennis encourages members to participate in the Richardson Cup in December and to put themselves forward as Match Managers for interclub play and for organisation of the Savile Tennis Dinner. For more information, contact: